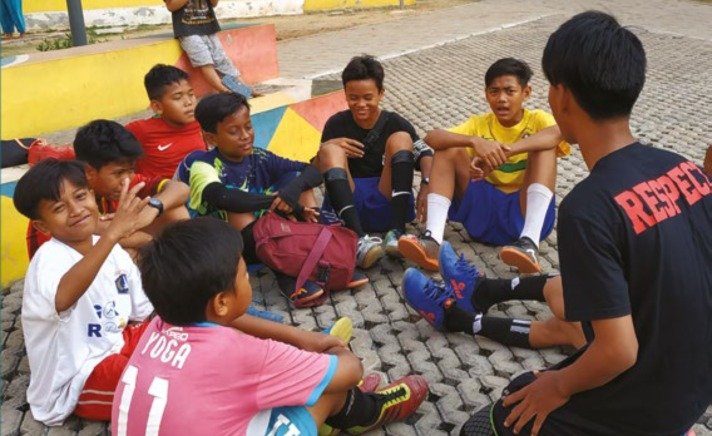 How Football is Changing Attitudes in Indonesia

How do you even begin to tackle the problem of sexual assault when you’re living in a country where one in four men have raped a woman? For one couple, inspiration was found on the football field.

It was break time at a busy high school in Bandung, Indonesia. An 11-year-old female student approached one of her teachers. “I need to buy a gun,” she said. “I don’t feel safe. Every day, I’m sure I’m going to be attacked by a man on the street.”

The teacher, Sophia Hamilton, knew that the young girl was not alone. A 2013 United Nations survey (‘Rape in Asia’) revealed that 26% of men had raped a woman and 33% either physically or sexually abused one. Half of all males who had perpetrated rape did so for the first time when they were teenagers.

That evening Sophia shared the story of her break-time conversation with her husband, Jon. They’d been living and working in Indonesia for several years, and as they talked, the challenge became clear. Could Inspire, the charity they had set up together, possibly begin to change the way men treated women in the country?

The journey to that point had been a long one. It began in the 1990s when, as a teenager, Jon flew out to Kenya on a Compassion trip. “I hated the building part of it, which is what we were meant to be doing, but one day I started playing football with the kids and I felt God say, ‘Jon, do this for the rest of your life.’ I assumed (wrongly) that I’d be heading back to East Africa at some point, but instead we felt God call us to live and work in Indonesia.”

In 2007, Jon and Sophia moved out to Indonesia and started Inspire. For years they worked hard and saw lives renewed, using football as a means of building relationships with young people and encouraging them to become agents for change. The couple started the Inspire Academy, training football coaches and several of the boys won scholarships to university.
But after Sophia’s conversation with her fearful student they decided to launch something new.

“Pledge United is an experiential eight-week programme with a two-part curriculum,” says Sophia. “Firstly, the teenage boys learn about the issue of gender-based violence within Indonesia, the rights of women and how to respect them. They find good ways to deal with their anger. Often, they’re violent to women because they’ve been hurt and therefore, they want to hurt others.

“Secondly, they’re inspired to become agents for change in their communities, and to stand up and speak out for the rights of women to be respected. Since football is a huge part of Indonesian culture, all this takes place within a framework of playing football. On the ninth week, everyone comes together to play the Pledge United Cup and stand together to pledge respect.”

The programme has brought about some significant changes in attitude. “A few weeks ago,” Sophia explains, “I was asking one of our boys what he’d learned. He burst into tears and told me, ‘You need to understand that for the last five years, I’ve seen my dad beat my mum every week. I thought I’d be doing that too when I’m older. Now, I want to protect my mum, and my wife when I get one.’

“Another boy who’d done the programme goes out every Sunday and approaches women, saying, ‘I apologise to you on behalf of the men in this country for what they’ve done. It’s wrong, and I want to stand up for you.’”

The programme is also having a significant impact in high schools. One Head Teacher told Sophia that he’d seen a huge change in the atmosphere at school. Many boys had become agents for change and were treating their female classmates and women teachers completely differently.

Of all the positive feedback they receive, the responses from female students are the most

encouraging. One girl said, “After some of my friends joined the Pledge United programme, they are more respectful, no longer treating girls as they please. Now they want to protect us from people who are trying to harass us. They no longer look down on us. The boys help and support us, and that makes us feel safe with them.”

Over 12,500 boys have taken part in the Pledge United programme in 15 cities across Indonesia. The project has been nominated in the Social Justice category two years in a row for the Beyond Sport Awards, a nod to the remarkable impact their work is having. However, the future looks uncertain.

“We need financial support to be able to keep training and equipping coaches. We’ve got a successful model and the vision – we just need the resources. We’ve travelled to India to investigate the possibility of expanding the programme. We believe that there’s a huge need and a great opportunity to change attitudes to women and girls and to grow respect for them.”

Give to Inspire Football Foundation here.

Take Pledge United’s Gender Based Violence Quiz. It takes less than a minute and the stats tell a story that needs to be changed.