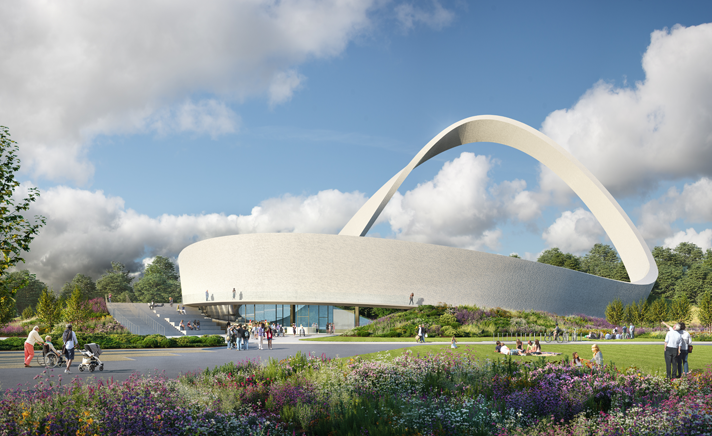 How the Eternal Wall of Answered Prayer is Taking Shape

“An image came to me of building a landmark made of a million bricks, each one representing an answered prayer. Obviously, I thought it was ridiculous and completely impractical. But I tried to be obedient and take the steps God showed me.”

Seventeen years on, businessman and former Chaplain to Leicester City Football Club, Richard Gamble, is less than two years away from realising the vision of building the largest database of hope stories in the world: the Eternal Wall of Answered Prayer. It’s been a long journey, beset with doubts and challenges. “I’m sure lots of people think I’m a nutter. This is the man, after all, who managed to burn down his bathroom and chopped a tree down in the garden which nearly fell into the house. If I had known what was coming, I’d probably have given up. However, God gave me the strength for each day and performed many miracles along the way.”

Richard feels passionately about prayer. “It’s so hard to find any positive news in the media and yet God is moving in this nation. The Eternal Wall is our way of telling the country that Jesus is alive and that he listens and answers prayer. Would you believe that 30% of Christians don’t believe that God will answer their prayer? I think that the Eternal Wall is the biggest evangelistic opportunity for a generation.”

In 2014, Richard ran crowdfunding to raise the money for a global competition to find the right design. “It was the kind of crowdfunding where if you don’t hit the target, it’s all over. With four days to go, we were miles off. I prayed through the night, absolutely desperate. I felt God told me to be at peace. Clare Balding interviewed me at the beginning of the campaign and as I left the studio, she said, ‘Well, there’s another man whose dreams won’t come true.’ On the penultimate day, money flooded in from all over the world. We hit our target with a day to spare.”

With design entries coming in from all over the world, Richard found himself pitching his idea at a parliamentary reception. “I was standing in front of all these MPs and the reality was that I had no idea, no money and no land. My wife and I flew to a conference in the USA and someone told us that God wanted us to know that he had some heavenly land prepared. One of our prayer team prayed that God would show her the land. We laughed! A few days later, she emailed us a map with a piece of land circled, saying that this was the place God had prepared. Just a fortnight earlier, the person who owned the land had emailed and asked to meet me.”

Six months before Richard’s original vision, the landowner had felt God spoke to him about building a national landmark for Jesus. For two years, offers of land went back and forth but nothing worked. “The landowner’s architect looked up all the land owned in the Midlands and came back with the place the lady had circled. Now we own it.”

If you’re building a national landmark, you need people to be able to see it. The Eternal Wall will be on the edge of Birmingham between the M6 and the M46. HS2 is right next to it and it’s underneath the airport’s flight path. Richard estimates that 800,000 people will journey past it each week.

“The wall will be two and a half times the height of the Angel of the North. The whole of Buckingham Palace could fit comfortably into it. When it’s built, people will be able to come and point their phone at any brick and it will light up and tell its story.”

While Richard has raised over £3.4 million through crowdfunding, Stewardship have stepped in to help with the rest. “Stewardship set up a fundraising page for us, are talking to donors and finding areas where they can be involved in supporting us. We love working with them.”

Richard and the team have battled with criticism ever since the project began. “People say, ‘Is this really how we should be spending our money?’ I appreciate that this is a counter-cultural vision, but we’ll be generating around £2 million per year for Christian charities from the income from car parking, the café and bookstore. We created the charity so that we can put the profits towards social housing and other national needs. If God’s not in this, spending £10 is too much, but we have daily proof that he is.”

Heading up such a massive challenge can be a terrifying prospect. “I often feel that I’m standing on the edge of a cliff looking down. I’m surrounded by facts telling me that what I’m attempting is crazy, but then I recalibrate my mind to the truth that God is in this, doing amazing things. We met with the people behind the Angel of the North a few years ago. They told us the press coverage was horrific until the day it went up and then everyone loved it. We believe that the same thing will happen with the Eternal Wall.”

This autumn, the road is being built to access the land. Richard needs to raise £2.5 million to begin building the Eternal Wall in 2022. “It’s time for Christians to stand up and be bold, to say what they believe. What better message could there be to our nation in these times?”

Give to the Eternal Wall Fundraiser

Prayer and Worship Tech and Innovation