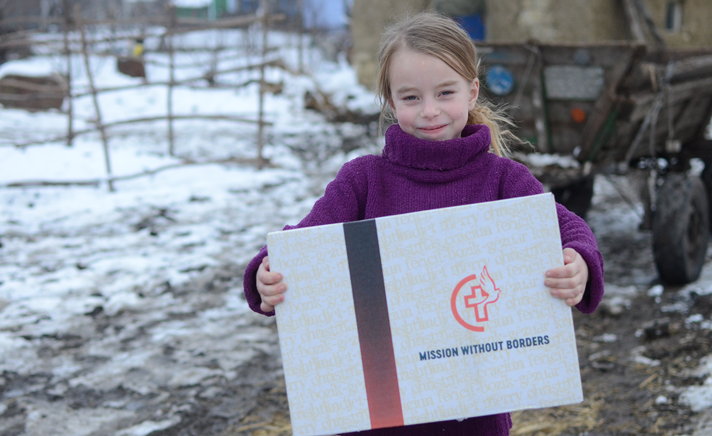 Helping the Hungry of Eastern Europe: Mission Without Borders

Recent headlines in UK newspapers warned of the risk of a ‘cancelled Christmas’ with issues getting turkeys, Christmas jumpers and pigs in blankets to eager consumers in time for 25th December. Frozen poultry, micro-scooters and Barbie Dreamhouses have been flying off the shelves thanks to panicked shoppers stocking up.

The contrast couldn’t be more stark with families living on the poverty line in Eastern Europe. Widower Grigore and his four children, live in a half-finished house on a muddy road in Moldova. His wife died giving birth to their fifth child, leaving him the sole breadwinner and parent in the second-poorest country in Europe.

In 2021, the stark truth is that there are many countries in Eastern Europe where children suffer from malnutrition, mothers routinely die in childbirth and families struggle to put food on the table. Which is where Christian charity Mission Without Borders (MWB) comes in.

“We work in six of the poorest countries in Europe,” says MWB UK Country Director John Chamberlain. “We evolved from Underground Evangelism, who smuggled Bibles across the Iron Curtain during Communism. By the time the Soviet Union began to fall in 1991, we’d made excellent relationships with churches and communities in the former Soviet Bloc. It was a natural evolution to build on supporting children and families in the terrible and isolating poverty which many suffered then and still do. Sadly, we believe people in this region have been forgotten and their stories are often untold.”

MWB work in Albania, Moldova, Ukraine, Romania, Bulgaria and Bosnia, all with huge issues around poverty and deprivation.  They partner with 266 churches in what they call a relationship ministry. “We’re not a sending Mission. We employ local mission co-ordinators and volunteers who live in the communities they’re supporting. In some cases, they’ve been working there for over forty years – they’re trusted and have a high level of credibility.”

Winter in these countries heralds a time of fear, deprivation and crushing poverty. The Malkova children in Eastern Ukraine live in terror of their violent, alcoholic father and try to care for their dying, paralysed mother. A ray of hope in their lives is Pastor Oleg, one of MWB’s local co-ordinators, who trudges through the snow with warm clothes and food for them. The Russo-Ukrainian War has been raging since 2014, adding to the struggles of this already deprived country. MWB’s annual Action Winter Rescue campaign helps to get essential food, basic supplies including firewood for heating and clothing to communities hard-hit by poverty, conflict and joblessness.

As Christmas approaches, the Malkovas and thousands like them face great hardship. The breadwinners in many poor, marginalised families have seasonal work, with no contracts or safety net. Many are laid off in winter, just as they desperately need money to pay for heating and fuel. With sub-zero temperatures, impassable roads and worrying spikes in Covid infection rates, this Christmas will be far from merry for many Eastern Europeans.

MWB’s Christmas campaign, Operation Christmas Love, sends boxes of food staples and Christmas treats to those who desperately need them. This year, they hope to send out around 42,000. Each box, including contents, filling and distribution, costs just £25. Essentials such as pasta, oil, salt and flour are augmented by chocolate Christmas treats and sweets for the children and a booklet telling the Christmas story. The average UK adult spends £476 on Christmas presents1, while 30% of the population spends between £20-£60 per head2 on Christmas dinner. Thousands of our European neighbours are struggling just to survive.

MWB’s goal is to reach people for Christ by showing God’s love to those in need. Whether that’s through running soup kitchens, supporting the elderly, setting up homework clubs to help young people meet their full potential or packing and distributing Operation Christmas Love boxes, they demonstrate the practical love of Jesus through humanitarian aid while spreading the good news of his love to those who most need to hear it.

You can donate here, giving £25 for an Operation Christmas Love box, sponsoring a child or a family or a one-off gift. If you have new clothes, including knitted items, they can be sent to us at 175 Tower Bridge Road, London SE1 2AG.”

Give to Mission Without Borders