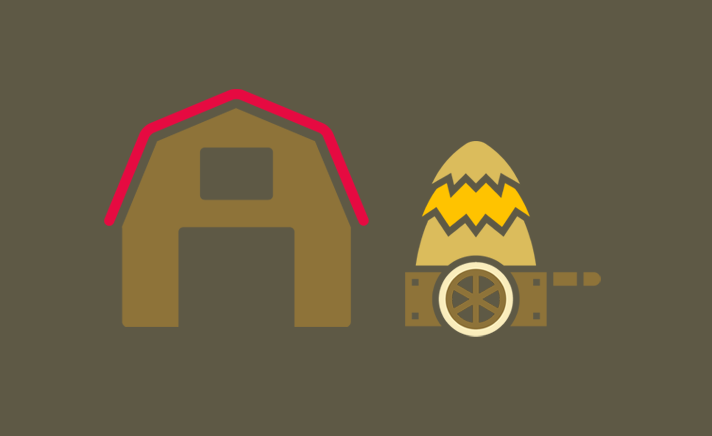 We Need to Empty our Barns

COVID’s impact on the lives of people living in poverty is undeniable. But for John Kirkby, founder of Christians Against Poverty (CAP), the last few months have thrown up more than a few surprises.

At the end of March 2020, CAP had to move fast and adapt when lockdown started. A key part of their work – face-to-face visits in the homes of the people they were helping to break free from debt – was brought to a sudden and abrupt end. And they soon discovered that they weren’t the only people keeping away from the families.

“The debt collection industry stopped within days, just like the rest of the country,” explains John Kirkby. “If anything, the effect on people who were in debt was a relief. The threats were all lifted, and remained lifted for months.”

While the sudden pause of debt collection was welcome, many living with poverty found their urgent and immediate needs increasing. But CAP was able to see the remarkable ways in which those needs were met as local communities unleashed their generosity.

“The whole UK Church responded in an amazing way. Donations flooded in and churches and food banks were able to serve so much more food than usual. We were able to release significant amounts of money to meet vital needs, helping people to keep their phones in credit, their electricity on and food on the table.”

These two changes combined to create a unique opportunity. With the threat of debt collection temporarily lifted and the basic needs met, CAP workers saw the potential to bring real change to people’s lives.

“It’s been phenomenal,” says John. “We’ve got thousands of clients and usually we see nine or ten of them go debt free each day. But even during lockdown there were days when we had up to twenty-five families going debt free… in one day – more than at any point in our history.”

John is under no illusions about what lies ahead. “One million, two million or maybe four million unemployed? And the vast majority of them will be among the poorest, those in the leisure industry, people with insecure jobs or on zero hours contracts. The discardable.”

But that’s not all.

“The collection tsunami is on its way. I worked in the finance industry for 15 years and they haven’t changed much. The one good thing is that the courts will be so overloaded they won’t be able to cope with all the eviction requests, but there’s going to be a scramble as businesses fight to get their repossessions in fast.”

While the discussions and disagreements about COVID strategy are varied, we can all agree that we’re facing a time when charities like CAP will need all the help they can get.

“People are giving. We wanted to raise £80,000 in our April mailshot. We hit that in 24 hours. People are sending us money, trusting us to use it well. Even though we’re very financially stable our income is expected to be down over £500,000 over the next 18 months and the impact on next year and the years to come could be huge. That’s why we were particularly grateful for the support we've received from Stewardship’s Rapid Response Fund.

“We will lose money from major donors, people whose businesses have been devastated. And with no churches or events to speak at we’ve not been able to generate new regular donors either. We know our current service can’t handle the need that’s coming. Our resources will drop in the next three years even though the demand is going up.”

Despite this, John is optimistic. “Innovation often comes out of challenge. If you don’t have to find a new solution, why would you?”

As much as the pandemic has forced us to re-evaluate our assumptions about the future, John also believes that it has acted as a litmus test of our attitude to money.

“What has this pandemic revealed? Do you manage your money well? Have you saved up? Do you live within your means? Maybe you’ve done a proper budget for the first time in your life, which is great – make sure generosity and giving is in the heart of it because our nation’s going to need it.

“There’s not going to be a V-shaped recovery for the poor of this nation. They’re facing an L. So don’t store your wealth away. Get your barns emptied, because you don’t want to die with a barn full of stuff. Even the charity commission is telling organisations to release their reserves. I’m telling everyone I can: ‘Don’t wait for a bigger crisis to empty your barns.’ The crisis is here and it’s not going to go away any time soon. So come on everybody!”