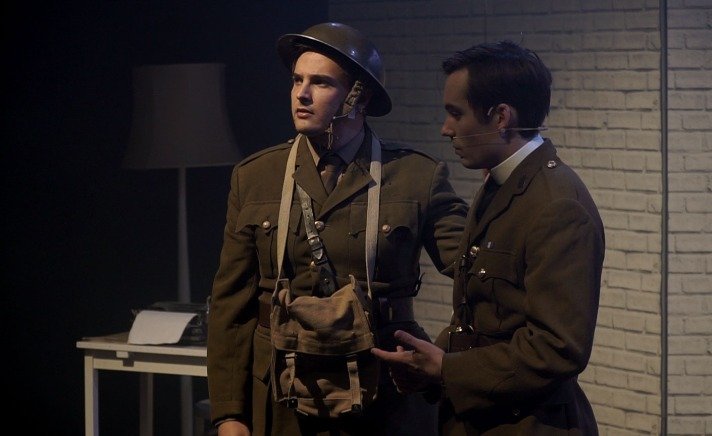 Sharing Jesus Through a Love of Performing

This is the story of how two boys, Chris Poch and Jon Maltz, turned their shared sense of humour, love of performance and faith in God from dreaming up an idea in a conversation after GCSE drama to founding Artless Theatre Company.

Chris: “My mum ran the drama group at church so drama was a natural fit for me. Jon and I played the Lion and the Wizard in a school show, as well as starring in a rubbish production we’ve put behind us. I’ll never forget going to see Kafka’s “The Trial” performed en promenade in an abandoned railway arch near London Bridge. We thought it was so cool. We asked the teacher if we could do something in that style for our A-level exam and that was the beginning of creativity spiralling for us.”

Jon: “I grew up in a Jewish family, involved with all the plays during Jewish festivals. I was cast from a young age, once playing Haman in the story of Esther at seven years old. Being booed by the wider family was character forming. Like Chris, I was in that realm of performance, watching football at Upton Park and developing a love of live events and exciting spectacle.”

The boys’ faith developed and they realised that God wanted to use their talent. “It hit us that theatre isn’t just an art form going back to Ancient Greece, but something God had put in us to help us express his love to others. Our love of performance didn’t have to be separate from our faith.”

Several years down the line, the friends met in a coffee shop near Blackfriars to make a momentous decision.

“I was working in sales, had got married and had bills to pay,” said Chris. “Jon had done his Masters and was working part-time at Lush, the natural cosmetics company. We knew that we were being called to step out of the boat. It was now or never.”

And so Artless Theatre Company was born. Wasting no time, they put on their first performance, a play called ‘News’ around the Christmas story, in an abandoned Carphone Warehouse shop.

Chris knew about Stewardship through his church, “Our amazing treasurer, Bob, relies on Stewardship’s services. Stewardship got us set up as a charity and they’ve helped us massively with the furlough scheme. Without them, Jon would still be selling bath bombs. They give us support that would be hard to find anywhere else.”

Artless perform all over the UK. “Our last national tour, ‘To War with God’ is a play about a WWI chaplain who lost his faith in the trenches then regained it, which was a great springboard for discussions with pupils. A girl came up to us and told us that she used to read the Bible, but then her uncle died, and she felt a barrier between her and God. Our show helped her to process her feelings and look at some big faith questions.”

Others have come to know Jesus through their work. “We performed that same show one night at a theatre in Brentwood. We later found out that a lady was in the audience who had been on the edge of belief for years. Something always got in the way and she could never get past that final hurdle. After seeing the play and having a discussion afterwards, her friend was able to lead her to faith. We’re humbled to know that God is using us in this way.”

Artless have used Stewardship to help with their yearly fundraisers. “We’ve livestreamed on an exercise bike for 24 hours, hitchhiked to Loch Ness in 24 hours, done a tandem cycle ride for 280 miles on the hottest day of the year and the infamous Bardathon, reading all of Shakespeare’s plays in two days. It was worse than the cycle ride, but we were amazed at people’s generosity.”

One highlight for Chris and Jon was performing for the Queen. “We were approached to perform on Songs of Praise for the 150th anniversary service for Scripture Union. We didn’t know the Queen would be in the audience, so we were a bit nervous, but delighted when our segment stayed in. We think she liked it!”

To find out more about Artless here.