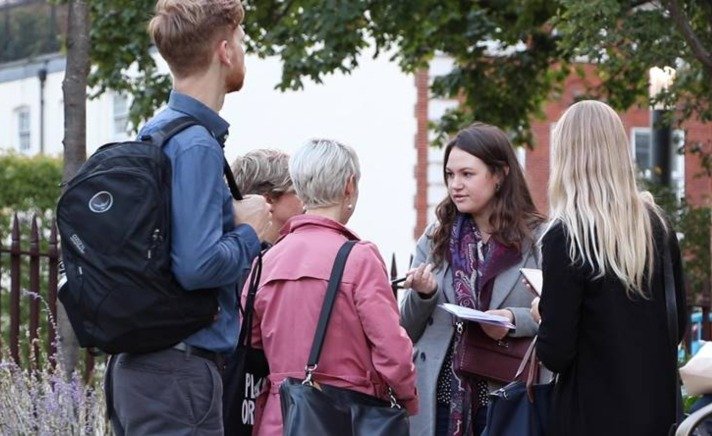 Rewriting History - Beyond the Streets

On a rainy day in East London, the Reverend Laura Jørgensen, vicar of St Botolph Without Aldgate, gazed out of her window onto the churchyard which was full of people pointing and staring. A familiar emotion stirred in her. She called it ‘Ripper Rage’. Her churchyard is one of the main attractions on the many Jack the Ripper tours conducted in East London.

Like Revd Laura, Rebecca Branch (manager of Beyond the Streets project Door of Hope) was also fed up with the salacious retelling of a tale of murder and sadism. “I’d leave work and see Ripper tours bringing thousands of people into the area, spreading an untrue narrative about women who sell sex. At Door of Hope, we work all day, every day with women in the area who aren’t seeing their stories being represented. The tours visit the murder sites, going into great detail about the biological aspects of the killings and portraying the perpetrator as an ingenious killer who outsmarted the police. This does his victims a huge disservice, creating a toxic legacy out of his crimes.”

Two years on, there’s a new kind of tour in the East End. Revd Laura has joined forces with Rebecca and a local historian to create The Hidden History of Women in the East End, a completely different kind of experience for those who want to know more about the real lives of women involved in prostitution.

Frustrated with the way the Ripper tours were exploiting the suffering of female victims, Rebecca, along with local researcher, Tess Horvath, wrote the content of the tour to focus on women. The difference is that unlike the traditional tours, this one goes to the places in Whitechapel where the five women lived, unpacks what was going on in their lives and tells the stories of some of the women Door of Hope work with now. “We try to demonstrate connections between the experiences of women who sold sex in the past and those who do it here today. What this highlights is how little change we’ve seen for women. Around 130 years on from the murders, women continue to sell what’s often referred to as ‘survival sex’ in our city.”

Rebecca’s tour is very different to the usual Ripper experience. “We never refer to ‘Jack the Ripper’. We call the perpetrator an unidentified murderer. Our focus is the women – we put a spotlight on their strength in times of great struggle.”

In addition to offering a different kind of historical tour in the East End, Beyond the Streets work hard to deliver cutting-edge services to women, which means keeping up with technology to support women. “Prostitution is going off the streets and moving online, putting a lot of vulnerable women out of reach of traditional support services like ours. We train people to go online and help, and that’s something that UK church projects really need to think about. Recently, at Stewardship’s office we hosted a training day on ‘net reach’ for UK church projects responding to sexual exploitation – equipping them to respond to the digital changes in their context. If we in the UK church are really serious about helping and supporting women who sell sex, we have to start doing things differently.”

Door of Hope is a project run by Beyond the Streets, a charity which provides support for women involved in prostitution. Rebecca is clear about what her ideal outcome of the Hidden History tour would be. “I’d love to see increased empathy, understanding and compassion for women who sell sex. There’s so much stigma around it which isolates women from community and support, making life even harder for them. I want people to leave our tour with a deep understanding of the vulnerabilities women in street-based prostitution face – childhood sexual exploitation, family breakdown, poverty and homelessness – and the strength women demonstrate in working to overcome them. It took an enormous amount of strength for women in sex work to survive in Victorian London. Looking at their lives and those of women who sell sex in London now, I have huge respect for their endurance of whatever life throws at them.”

Reactions have been positive. Bex Keer, who went on the tour in October last year, wrote to express her thanks. “I really appreciated how you explored the women’s lives and not their murders, and how you talked about the unidentified murderer. That story, alongside the history of campaigning and the current-day issues were very well woven together.”

Door of Hope is a project of Beyond the Streets, a national charity which partners with women on their journey out of sexual exploitation.

Support Beyond the Streets here.