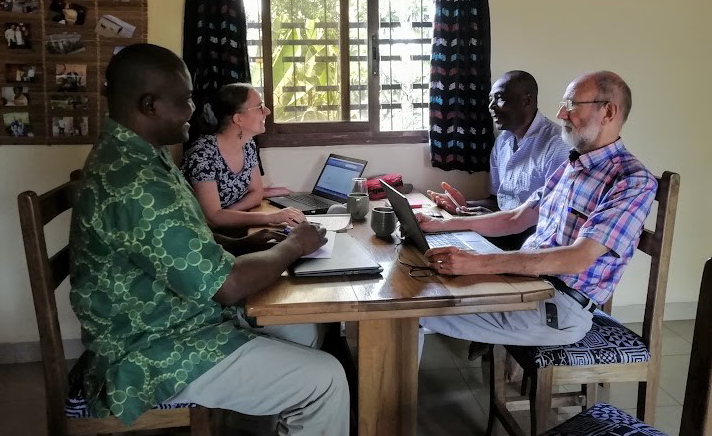 The Long Road to Bible Translation

While Jane Ingle was studying French and German at University in the UK, she saw a careers booklet for jobs in languages which included a mention of Wycliffe Bible Translators. It wasn’t French or German that needed translating anymore, she thought to herself.  It was all these other languages, that no one had heard of, in far away places she was not ready to go.

She brushed it aside. She went on to study Dutch and took up a job as a translator in the insurance business.

Years later in 2001, she rediscovered the scriptures and put her faith in the God of the Bible. “I just couldn't get enough of it,” she said. Jane wanted all people to be able to read the Bible, and hunger for it like her. She prayed to God, “I'm okay with whatever you're going to do with my life. It's scary, but I trust you.”

Eventually, Jane quit her job, trained with Wycliffe and moved to Northwest Cameroon, where she has now worked for a decade.

Sitting inside her home in Cameroon, trees swaying in the storm outside, Jane testified to the seed that had been planted in her heart, even before she became a follower of Jesus. The article in the careers booklet at university had introduced her to Wycliffe – a mission agency that partners with local communities to translate the Bible into their own language.

Jane works on the Ndop language project, which involves ten languages local to the communities who live there. She focuses on Ngiemekok, the language of the Bamunka community. It is spoken by around 31,000* people.

“My role is as a linguist, investigating how to improve the writing system for a particular language, ultimately to see this community able to read or hear the word of God in the language that comes naturally to them.” There is no shortcut to this mission. The work to script the language and publish a bible translation, began in 2004, long before Jane joined in 2011.

In the earliest stages of the project, the team analysed sounds. An alphabet was proposed. Then a spelling was worked out. Next, there was the determination of where to break words. When Jane first arrived, she worked with a speaker of Ngiemekok to learn the language. She would point to objects like a table, and ask what it was called. Then she would get on the move, to prompt the words for motions like running and jumping.

She then went on to collect language data, analyse grammar and help edit reading manuals designed for apps on smartphones. In line with the oral culture, the team have been working on literacy projects, scripture recordings and a film based on the gospel of Luke.

However, as with many languages in this part of Africa, tone is crucial to the meaning of words as well as to the grammar. Working out a way to mark tone in the draft of the New Testament in Ngiemekok, has been the heart of Jane’s work over the last few years. Her proposal for the possible ways to mark tone is currently being tested. The vastness of linguistics, she explained, is her greatest challenge. But she knows she must keep going.

“We have to balance getting to the end of the project. The funding is available now, people are working on it now. This is the time to be translating in this language, for this community. The challenge is really pinpointing the answers we need to clarify, without being sidetracked into other linguistic questions”, she said.

The Ngiemekoke translation of the New Testament is scheduled to be published next year. It has been a labour of eighteen years. While this work is groundbreaking, the day to day can sometimes feel insignificant. “I find it very hard to see the fruit of the work that I’ve been contributing. It’s very indirect – it’s foundational work feeding into the translation work. I haven’t seen people’s lives changed directly.”

But on the way, there are moments that spur Jane on. Like the multimedia tools which help the Bamunka people engage with scripture, sitting together with a cross-cultural team brainstorming on translation issues or Jane’s love for the Ngiemekoke language. But most of all, it’s her love for the community.

In November 2020, Jane moved into a home with a Bamunka family. She lives in the annexe of their house, and enjoys speaking to them in Ngiemekok and daily life alongside them. “Transition, transition, transition has been my life,” said Jane, who has constantly been on the move in Cameroon. But she finally feels at home with the family.

Jane raises her own financial support from churches and individuals in the UK and continues on the long road with a firm confidence: “I know that God speaks all languages. I know that He speaks Ngiemekoke, the language of the Bamuka.”