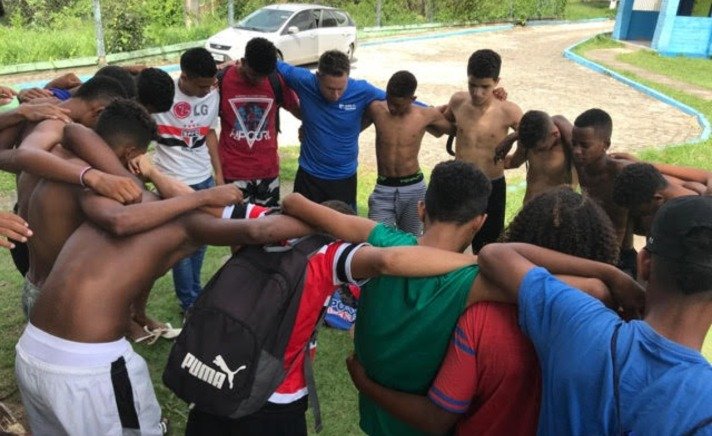 Every Monday night, Paul Crothers brings together a group of young men in their twenties, around a football game. They play a match, pray and spend the evening together, as they have been doing for over a decade. Paul – a banker turned missionary – has seen these boys through from teenagers to young men.

Paul was in his twenties when he first travelled from Lisburn, Northern Ireland to Recife, Brazil in 2002 on a mission trip. He didn’t speak Portuguese at the time, but he could speak the “common language.” He could communicate on the streets with a football at his feet.

For twelve years after that first time, Paul kept going back. Finally, he wrapped up his decade-long career in the bank and followed his calling to Recife as a full-time missionary with the agency Latin Link. Since January 2016, he has worked on a project called Vale do Senhor or Valley of the Lord. The majority of his work with the project is to shape the thinking and challenge the behaviour of 70 boys between the ages of 11-18 years and 20 young men in their early twenties. Paul quickly noticed that many of the boys had grown up without a father figure or a male role model. He stepped into that gap, using a sport that connected them together.

“I really believe that a big aspect of our work is to be someone who they can learn from. Both from a Christian point of view, but also just in general about how a man should speak and how he should treat others.” Paul explained that football provides an incredible opportunity to model many good things: character, discipline, mutual respect and teamwork. Playing together and coaching young boys has also helped him build trust with them. He said, “Having built up that respect with the boys and that sense of trust, it gives you the opportunity to become a real influence in their lives and share God's word with them.”

Because every day is such a fight for survival, many of the boys play football in the same way as they live their lives: in survival mode. They feel they must fight to get ahead and a match becomes a matter of life and death. This is where Paul begins to reason with them. When he referees a game, he reminds them that no one is trying to cheat them. When he chats with them, he acknowledges the unfairness that they have been grown up in and introduces the idea of forgiveness and gentleness.

The lack of an earthly father-figure can often make it hard to grasp the character of God as a Father. So Paul tries to model God’s mercy for the boys.

If they have to be pulled up for bad behaviour, Paul makes sure that they know that they have not been given up on and that he has not washed his hands of them. “As Christians, we know that God is a God of second chances, and he's given us each one. That's kind of the way I always look at it with the boys,” said Paul.

At other times, Paul has to show some tough love. He tells the story of a boy who had to be dismissed from the project for a little while on account of misbehaviour. Ten years on, he is one of the young men playing football with Paul every Monday night. He even took Paul to see his brand new hair salon business. Paul is committed to always being there for the boys, through their years and through their seasons. “I want them to know that even if family isn't there for them, or friends let them down, there are still other people that are here for them.”

Paul comes from a heritage of football players. His dad always loved the sport and his grandfather was a professional football player in the 1930s.  Their love for the sport passed on a tool for mission to him. A lot of Paul’s funding is raised from individuals, friends and family and his home church in Northern Ireland. He appreciates small amounts of money over sustainable periods, a format of giving that can be arranged with a Stewardship Giving Account.

Paul knows that many young men are looking for someone to follow. But he also knows his frailty. He tells the boys, “As much as I'll try and do my best, and as much as I'll try to support you, you can’t put your faith and trust in individuals and humans because they will let you down.” Instead he encourages the boys to look to Jesus, who will never abandon us.