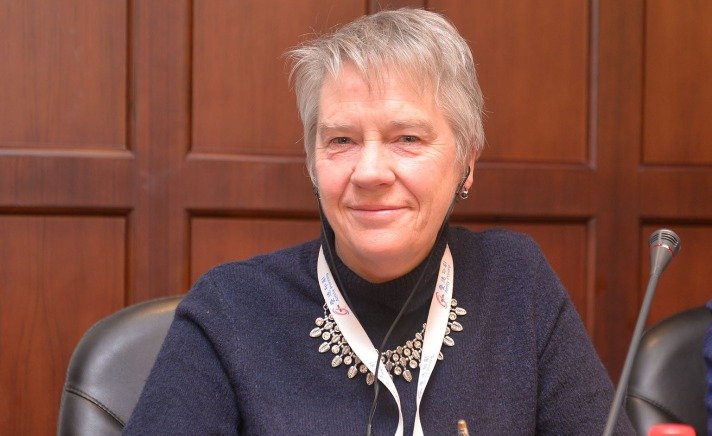 Give Away the Bible

We talk with Elaine Duncan of the Scottish Bible Society about how she’s found the Bible to be a powerful evangelistic tool for everyone, everywhere.

How did you begin giving away the Bible as a resource?

As a very young teenager I realised that being a Christian wasn’t just about believing a certain set of facts, but that those facts led you into a living relationship with God through Jesus, empowered by the Holy Spirit. My career path was to be a clinical psychologist so I went off and studied, but since then I’ve had fourteen years working with students, eleven years with Scripture Union Scotland, and that led me to the Bible Society, where I’ve been for fourteen years. So I’m sixty-two, just in case you wanted to count!
I remember sitting with students, some of whom were not Christians, some were, and seeing eyes light up when you’re looking at a Bible passage together and they discover something about God.

It sounds like mission and evangelism have been a big part of your life.

I had a situation in lockdown where I was going to the dentist, and SBS has just produced a version of Mark’s gospel which is very colourful with lots of pictures in it, quite an engaging version. I thought, “Right, I’ll take three, one for the dentist, one for his assistant, one for the receptionist.” Then I thought, “Do I really want to do that…? No, come on!” It’s the challenge of personal evangelism – you can teach other people about it, but will you put your life on the line yourself? So, I took them, I handed it to the dentist and his assistant, and he said, “So what is it?” I said, “It’s the gospel of Mark.” He said, “So is that like a philosophy book?” I said, “No, it’s about Jesus!” And I realised that I do tend to live in a bit of a Christian bubble. Here I was passing part of the Bible on to somebody for whom the word ‘gospel’ was not on his radar.

I backtracked and explained a little more about what the book was actually about. He used to go to the Boys’ Brigade and it had not entered his orbit since then. But his wife had recently given birth and I think when people become parents for the first time, they often wonder about some of those deeper questions in life. So, we had a really good conversation. Next time I go, I’ll be asking if he’s read it!

We want to make sure that Christians have the right tools. Last year through lockdown, because everything had to go digital, some of the team and some of our volunteers worked on podcasts. We have one called The Outspoken Bible, which is just three people conversing about the Bible. We work with a creative consultant who put together an audio drama of the book of Ruth so there are different ways for people to get into the text. Some of those are easy to pass on to friends who are not yet Christians. It whets people’s appetite, intrigues them, or leads them into something deeper.

In my student work days, I met a girl who said, “I’m about to get baptised in my church, and they’ve has asked me to give my testimony. I don’t know what that is!” I said, “Tell me how you became a Christian.” She said, “Well, I was going through a bit of a hard time. I was in my flat alone one night and there was a copy of John’s gospel lying around, I picked it up, I read it, and fell in love with Jesus.” I said, ‘That’s your testimony, just tell them that.”

I’m all for doing apologetics and all of that. But sometimes we just need to get people reading the Bible, and God by his Spirit speaks it into their heart. I think we sometimes forget that the Bible by itself is a powerful evangelistic tool.

What would you want to say to people wondering about supporting Scottish Bible Society. What would their support do?

When people are interested in our work and find out more and want to pray for us, that is wonderful! For those that want to do that and also provide funding, we’re always hugely grateful for that kind of commitment –we see those people as partners. As soon as someone prays for us, they’re a partner in the gospel with us. That is terrific. We would want to reassure people that when we raise funds, they go to the cause we’ve raised them for.

The average cost of someone in the world receiving a Bible is just about £5. So for £5 you can change a life. That’s incredible. But that’s how God’s economy works!

Elaine Duncan is the Chief Executive of Scottish Bible Society, leading staff and volunteers in their mission to provide God’s Word for the people of the world.

Give to the work of Scottish Bible Society here.