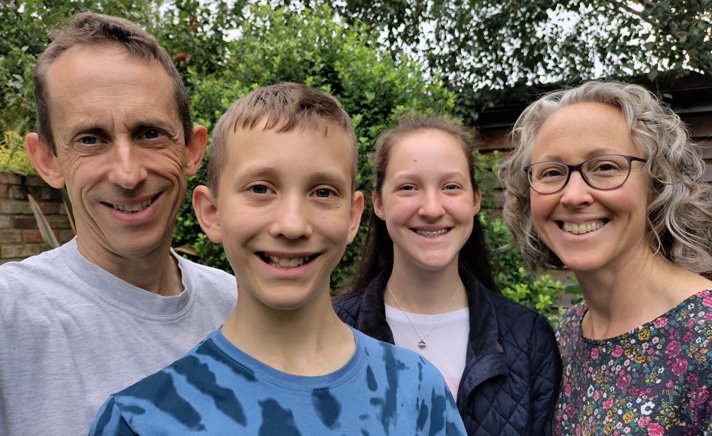 Cleared for Take-Off: The Rolfe Family

For Fran and Dave Rolfe, life on the mission field has been 20 years in the making.

The first time Dave arrived at the Helimission office was a difficult date to forget: 11th September 2001. But it’s only in the last couple of years that everything has come together for Dave, Fran and their children, Lillian and Nathan, to step out of their familiar lives in the UK and into a new adventure.

Dave has had a passion for aviation since he was five years old and has flown helicopters for 20 years, accumulating about 6,000 flying hours. Most recently he was working as a safety manager for London’s Air Ambulance service, but Dave will soon be swapping the cityscape of the capital for the mountains of Papua, Indonesia.

Helimission are a non-profit organisation that provide transport to help relief organisations and mission agencies reach remote areas. Dave was a speaker for Mission Aviation Fellowship for 18 years and kept in touch with Helimission during that time, but there were always factors that prevented him from joining them. This time, however, Dave’s combination of skills matched what Helimission needed and the couple felt prompted that ‘If not now, then when?’

For the Rolfes, it was very much a family decision to go. “We think of it as all four of us going on mission,” says Fran. “We’re at a bit of an unusual time in life to be going – we’re not newly married, we’re not retired, our children are 15 and 12 years old. A lot of people leave the mission field at that point and come back to the UK for schooling reasons.” But the family have been home educating their children for 5 and a half years. Both Lillian and Nathan have a faith of their own and Fran is intrigued as to how God will use them all in Papua. “For Dave his love is to serve the Lord with his flying skills, which are considerable. My heart is to reach the lost and to build community, and so together we make quite a good team.” Fran is hopeful that she can use her background in youth and community work.

Helimission encouraged the Rolfes to go on a vision trip to Papua for a month so that they could decide together whether it was something they wanted to do. “Lillian loved it, she cried coming back to the UK, she just found it beautiful and freeing to be there.” says Fran. “Nathan was a bit more reserved, he feels at home in the UK but he’s walking the journey.” Dave adds “When we came back from Papua it took him about a month or so, he wasn’t sure at first but he’s willing and wants to go.”

Because Helimission are a Swiss-based organisation there’s no way for them to raise support in the UK, so Stewardship have helped Fran and Dave with setting up their Individual Partner Account. They attended the Support Raising training which gave them the confidence they needed to approach potential supporters. “As Brits it’s hard to approach people for money,” says Dave, expressing the concern that many would feel stepping out of a regular salaried role into self-supported Christian work. “But the training gave us the biblical principles of why and how it could work: it’s not begging, it’s raising money for God’s work from the resources of his people.”

It was Caroline Burns, Stewardship’s Head of Individual Partnerships, who shared an analogy that helped Fran and Dave to think about partnering with supporters in a different way. “Caroline compared it to announcing your engagement and everyone is excited and congratulating you, but you don’t then just add on a message asking for anyone who wants to be a bridesmaid to get in touch,” Fran explained. “You ask people personally. There are friends who we approached who said they would have been offended if we hadn’t asked. The relationship is so important – we are walking together with these people and plan to schedule in time to pray for all of our supporters regularly too.”

Fran and Dave are excited to have almost reached their target for support as at the time of interview the family are preparing to travel to America for a semester’s training at seminary before heading to language school in Indonesia and then to Papua. The flying will involve anything from transporting local Indonesians and Papuans to help tribes with Bible translation, to medical evacuations in areas where only a helicopter can reach. The flights make no profit, in most cases only charging a nominal fee for fuel.

“I always link it to the story of the Good Samaritan” explains Dave. “He couldn’t get anybody anywhere without the donkey. Flying the helicopter is really just a tool to help.” Fran adds, “I often think about the verse that says every tribe, tongue and nation will be together in heaven. There are only a few left who have never heard about Jesus. We want to reach the unreached so that everyone will have that opportunity.”

Give to support the Rolfes' work with Helimission

For peace and trust for the Rolfe family in all the finer details of preparation before they go.